You can find on this page the Taipei transport map to print and to download in PDF. The Taipei transportation map presents the transports network and transport zones of the transit of Taipei in Taiwan.
Travelers can take a flight from many places in the world to get here; then enjoy a train ride or a long-distance bus trip to other cities on the island; or take metro, city buses, taxis or bikes to travel around the city (see Taipei transport map). 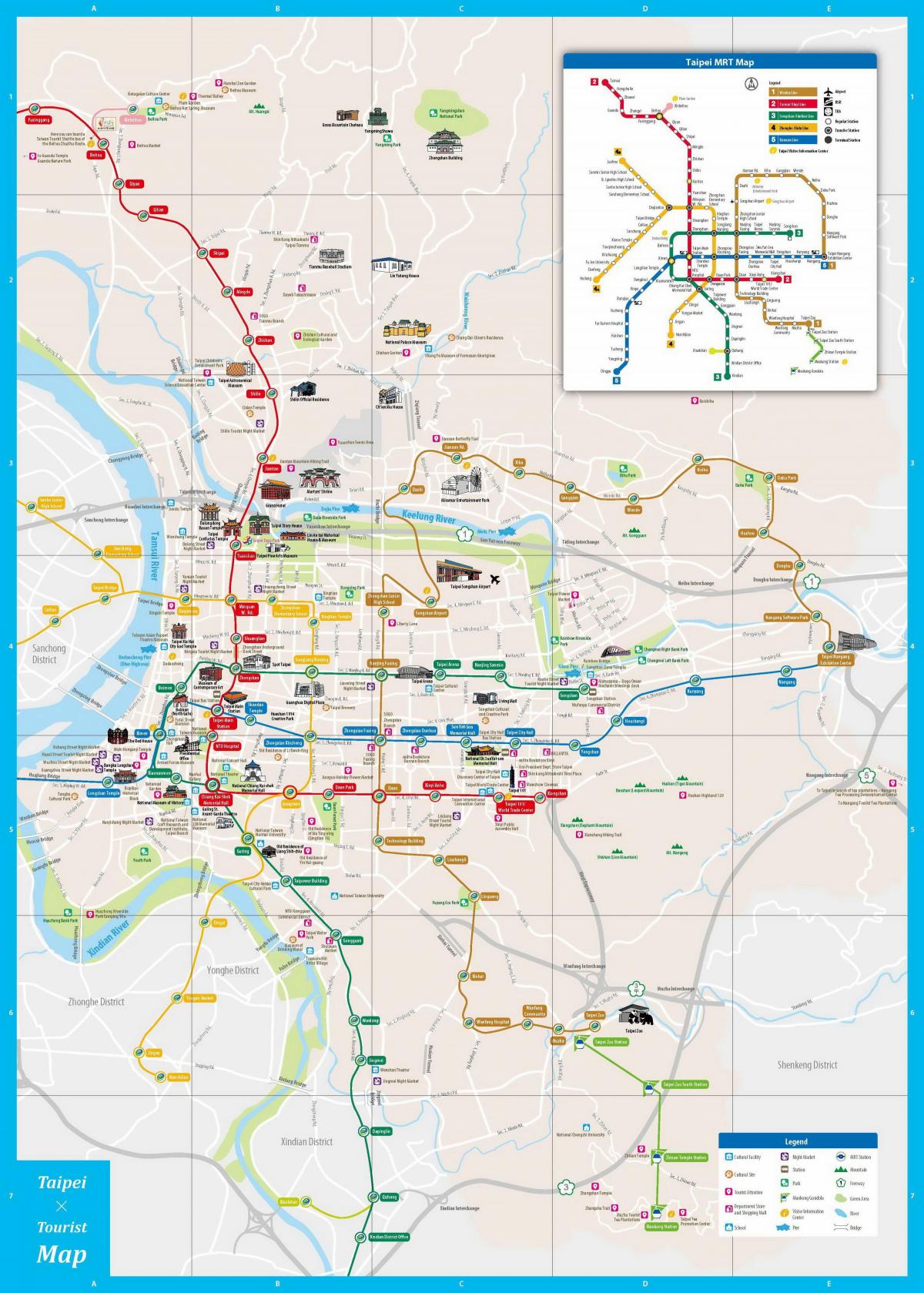 Public transport accounts for a substantial portion of different modes of transport in Taiwan, with Taipei residents having the highest utilization rate at 34.1%. Private transport consists of motor scooters, private cars, and bicycles as its shown in Taipei transport map. Motor-scooters often weave between cars and occasionally through oncoming traffic. Respect for traffic laws, once scant, has improved with deployment of traffic cameras and increasing numbers of police roadblocks checking riders for alcohol consumption and other offenses.

The Taipei Rapid Transit System, also known as the MRT ("Metropolitan Rapid Transit" or "Mass Rapid Transit") or the Taipei Metro, is a rapid transit system serving a large part of the Taipei metropolitan area in Taiwan. It is Taiwan first metro system and its network includes 92.9 km of rail (90.5 km in revenue service) with 80 stations and includes both underground, at-grade, and elevated routes (see Taipei transport map). The system is operated by the Taipei Rapid Transit Corporation or TRTC. The Taipei Metro is one of the most expensive rapid transit systems ever constructed, with Phase One of the system costing US$18 billion, and Phase Two (currently under construction) estimated to cost US$13.8 billion upon completion.

One of the huge advantages to using public transportation in Taipei is the easy-to-use payment system. Unlike in other cities where you might need exact change or tokens, Taipei has a couple different payment options that are hugely convenient for travellers as its mentioned in Taipei transport map: EasyCard: A contactless payment card that can be used on all forms of public transportation in Taipei as well as in participating shops throughout the city. Simply scan the card on your way in and on your way out to have the fare deducted from the card. The EasyCard offers a 20% discount on single rides over regular tokens. Cards can be purchased for NT$100 and topped up at metro stations and convenience stores like FamilyMart and 7/11. Taipei Pass: Offers unlimited rides on the Taipei MRT and Taipei City buses. Several different durations are available including one day, two days, three days, and five days. You can purchase the passes at all MRT customer service counters.