You can find on this page the Taipei metro map to print and to download in PDF. The Taipei metro map presents the network, zones, stations and different lines of the metro of Taipei in Taiwan.
The Taoyuan Metro and Taipei Metro work the same as most subways around the world: tap in and out through the gantries by placing your fare card on the sensor (see Taipei metro map). 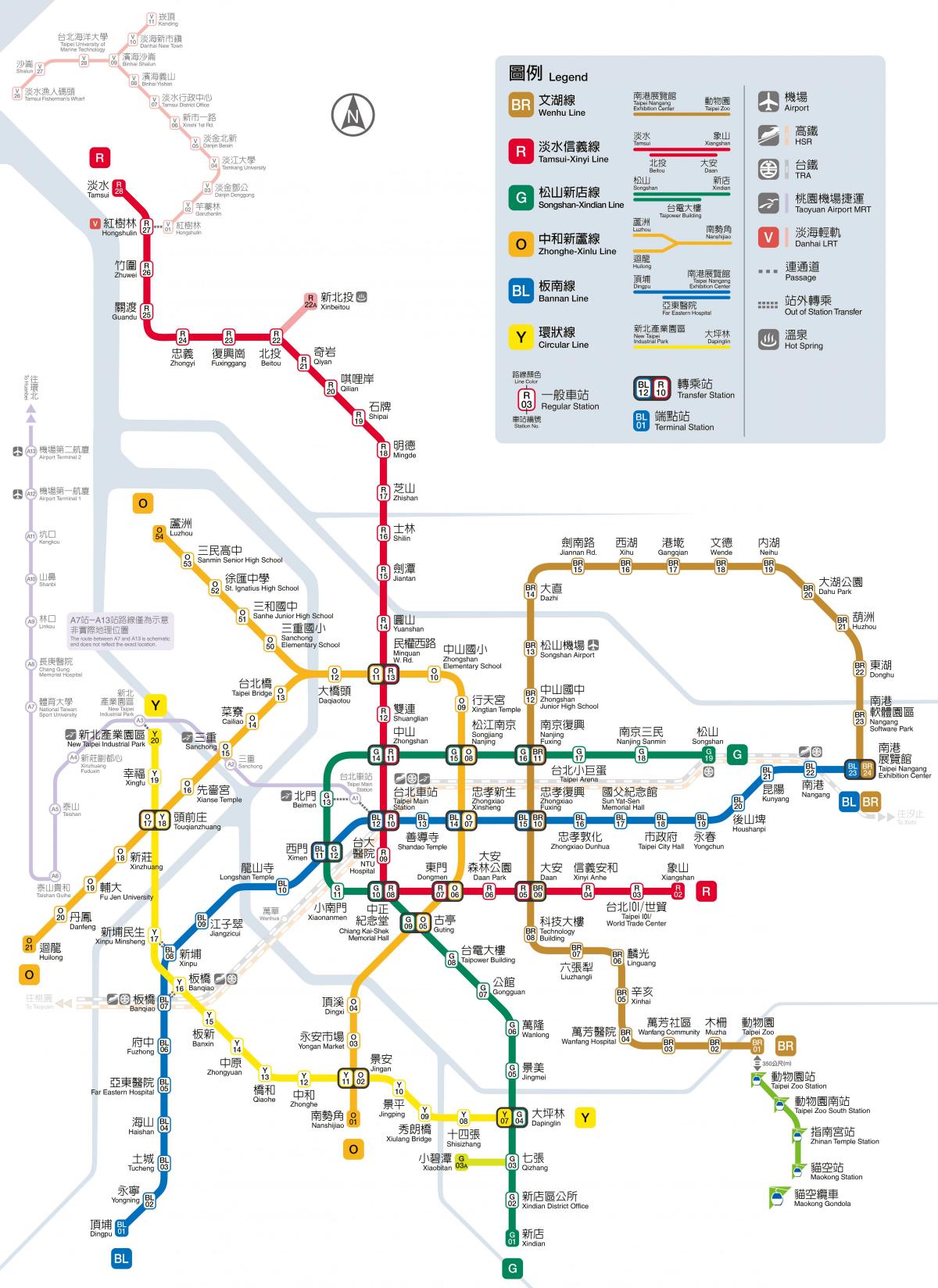 Taipei Metro, also known as Mass Rapid Transit or MRT, is the most convenient means of public transportation serving the metropolis and New Taipei City. Currently, five main lines, two branch lines and Taoyuan Airport MRT line are in operation, covering a distance of 117 miles (188 kilometers) as its shown in Metro map Taipei. People in all districts of Taipei and some areas in New Taipei City can enjoy the rail transit. The Circular Line is expected to operate by the end of 2016. In addition, more metro lines will be put into service in the following years, such as Wanda Line, Minsheng-Xizhi Line, Shenkeng Line and Xinzhuang Line Extension.

To guarantee people leisure activities, the authority allows bicycles to be taken on metro during weekends and holidays. Each person can only take one bike and it is forbidden to use the escalator with bike. Regardless of the distance, the cyclist should pay NT$80 to ride the train. Generally, the size of the bicycle should be within 71in*47in*28in (180cm*120cm*70cm) in length, height and width. Children under 14 years old cannot bring a bike on train unless being accompanied by an adult. Bicycles are allowed to take into many MRT stations except the following as you can see in Metro map Taipei: Tamsui Station, Taipei Main Station, Daan Station, Zhongxiao Fuxing Station, Nanjing Fuxing Station, All stations on Wenhu Line.

Single Journey Ticket: They are available at the ticket machine in every MRT station as its mentioned in Metro map Taipei. The fare is NT$20-65 which varies with the distance, and the ticket is valid only on the day of issue. Taipei Pass: The card allows passengers to take subway, and city buses with the mark of Taipei Pass for unlimited times during the period of its validity. It can be bought at the EasyCard Customer Service Center at local Main Station, and the information centers in all metro stations. The card has several types, including the NT$180 1-Day Pass, NT$310 2-Day Pass, NT$440 3-Day Pass, and NT$700 5-Day Pass. In addition, the Maokong Gondola 1-Day Pass enables passengers to take the gondola for unlimited times in a day and it costs NT$350. 24-hour Metro Pass: Being valid within 24h from its first use on the metro, it is a good choice for one-day visitors touring around the city using MRT. It costs NT$180 and cannot be topped up. 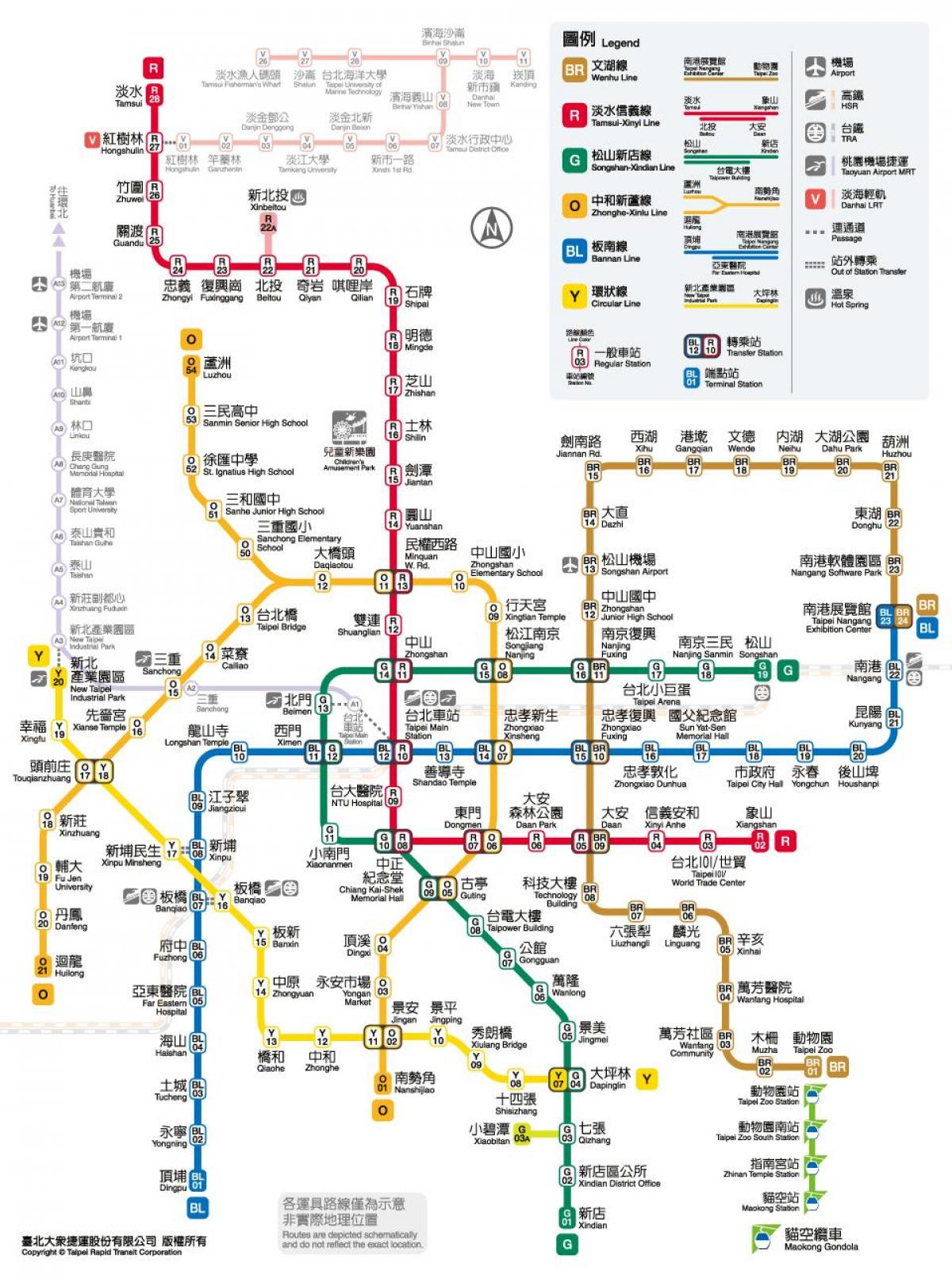