You can find on this page the Taipei bike map to print and to download in PDF. The Taipei bicycle map presents the bike routes and lanes of Taipei in Taiwan.
Some areas of the city, particularly the boardwalks around the Tamsui River and Keelung River, are lovely to check out on a biking trip as on Taipei bike map. 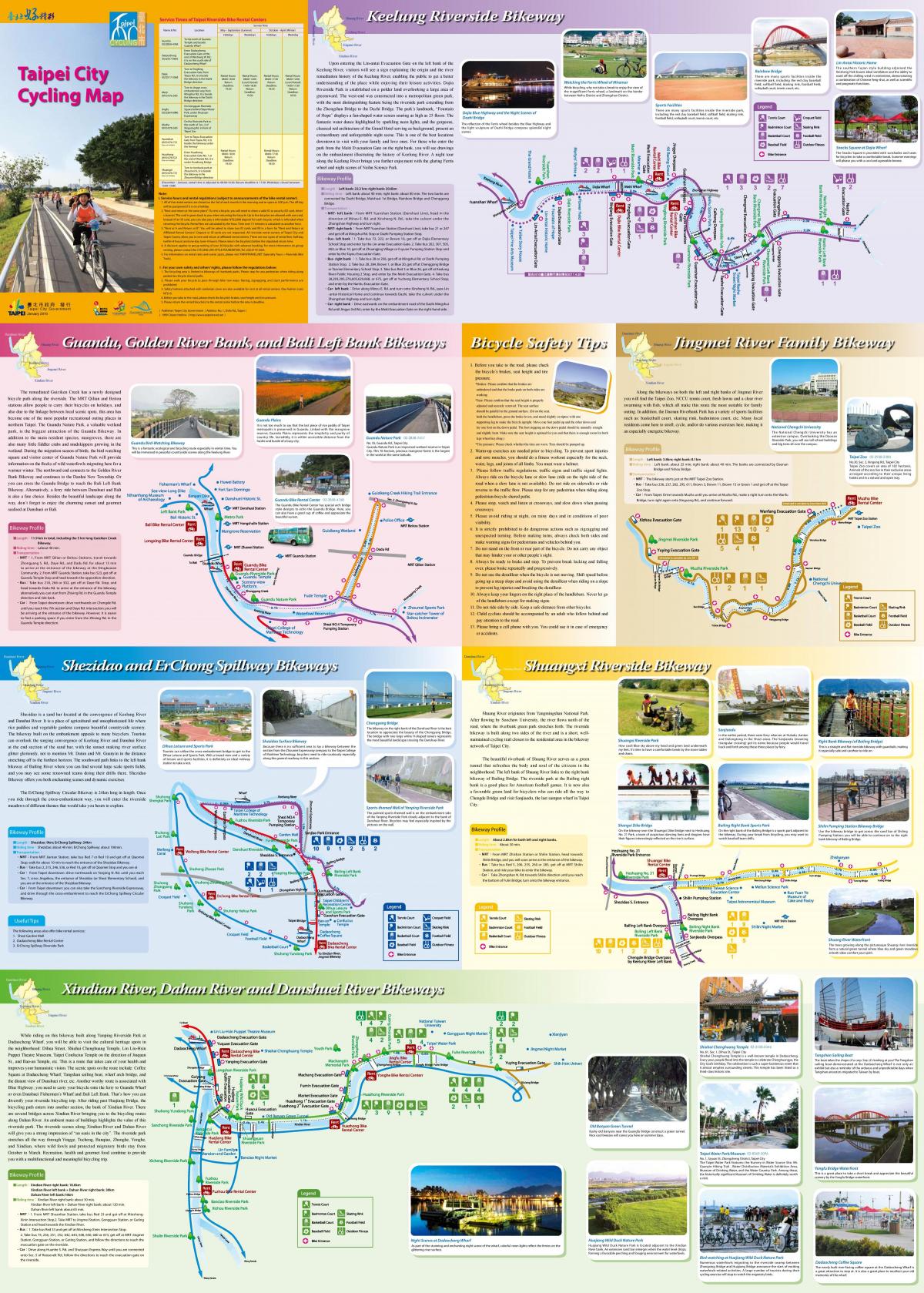 The city has about 180 bike lease stations and riding as its mentioned in Taipei bike lane map. You can use the Easy Card to rent or pay NT$2,000 as deposit. It takes NT$10 every 30 minutes for the first 4 hours, NT$20 every 30 minutes for 4-8 hours, and NT$40 every 30 minutes after 8 hours. On the way, you can find clear route signs. What is more, there are also detailed biking maps for you. Taipei has a highly successful public bike-share scheme known as YouBike (or Ubike). It is also got established bike lanes downtown, making cycling safe and convenient. To use YouBike, you will need an EasyCard/iPASS + a Taiwan phone number (a prepaid tourist SIM card works fine).

There are bike lanes through parks and along most rivers in the city. So taking a bike around for short distances or for touring is in an option. It is permissible to ride on the sidewalks. “Ubikes” are rentable at MRT stops and popular places, using an “easy card” (悠游卡 yōuyóukǎ) and your phone number to register. Yuanshan to Nangang its length: 9 miles (one hour) as its shown in Taipei bike lane map. Before taking off on this route, cyclists should check out the cultural attractions near Yuanshan MRT station, from the wonderfully curated Taipei Fine Arts Museum to the culinary hub of Maji Square. Nearby, the Keelung River Bicycle Trail leads cyclists on a leisurely route.

Chiang Kai-Shek Memorial Hall to Taipei 101 its length: 3 miles (30 minutes) as you can see in Taipei bike lane map. The only way to really take in the size and scale of the gargantuan Taipei 101 skyscraper is to ride a bike directly toward it. Starting at Chiang Kai-shek Memorial Hall, cyclists can pedal along Xinyi Road while exploring neighborhoods along the way. Suggest travelers take a quick loop around Da’an Forest Park before continuing straight toward Taipei 101. Treasure Hill to Tamsui its length: 19 miles (two hours). Beginning in the busy university neighborhood of Gongguan, cyclists can admire the uniquely Taiwanese architecture of Treasure Hill. Once a densely populated village, the complex now serves as an artistic space for various galleries and exhibitions.