You can find on this page the Taipei tram map to print and to download in PDF. The Taipei trams map presents the network, zones, stations and different lines of the tramway of Taipei in Taiwan.
The Danhai light rail (Taipei tram) is a light rail transit (LRT) system in Tamsui District, New Taipei City, Taiwan as its mentioned in Taipei tram map. 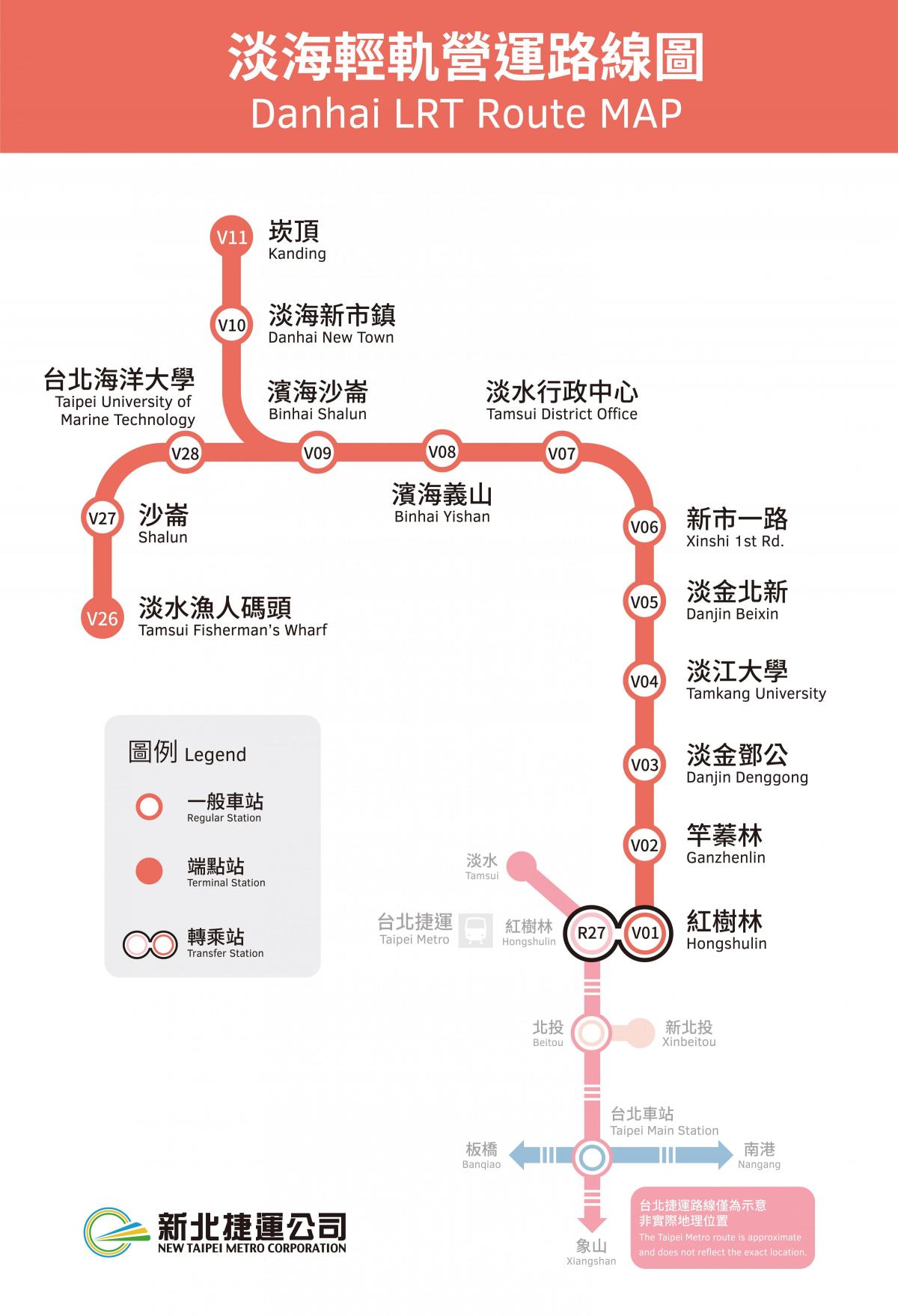 Almost two years ago, a new transport system was opened in the Greater Taipei area, Taiwan capital city: The Metro New Taipei, also referred to as Danhai Light Rail. Actually this new urban rail service is a mixture of a modern low-floor tramway system with some characteristics of a heavier metro operation. The first line connects with Taipei metro system at its terminus Hongshulin and uses an elevated alignment during the first 5.2 km up to Tamsui District Office, while the remainder of the 7.4 km long, first line to Kanding is at grade with level crossings as its shown in Taipei tramway map.

The first “Green Mountain Line” started revenue service on 24 December 2018. On 15 November 2020, a 2.4 km long branch route was opened between Binhai Shalun and Tamsui Fisherman Wharf as you can see in Taipei tramway map. The new “Blue Coast Line” operates between this area and Hongshulin – the common section from Hongshulin to Binhai Shalun is served by both lines every 7.5 minutes with trains running alternatively to Kanding and Tamsui Fisherman Wharf. 15 modern low-floor articulated tramway vehicles provide the service on the Danhai Light Rail. They were built by Taiwan Rolling Stock Co., Ltd. in cooperation with Voith Engineering Services from Germany. They are 34.45m long, 2.65m wide and offer a capacity of up to 265 passengers, of which 62 can be seated.

Currently, there are only two modern light rail / tramway systems operating in Taiwan, the other one being located in Kaohsiung. CAF Urbos tramcars provide the service in Kaohsiung since 2015. Both systems are considered to be quite a success, and it is not unlikely that we will see additional light rail systems become reality in the near future. In Greater Taipei, four more light rail lines are planned for the near future, the Wugu Taishan Light Rail, Shenkeng Light Rail, Taishan Banqiao Light Rail and the Bali Light Rail, with a total length of about 35 km as its mentioned in Taipei tramway map.