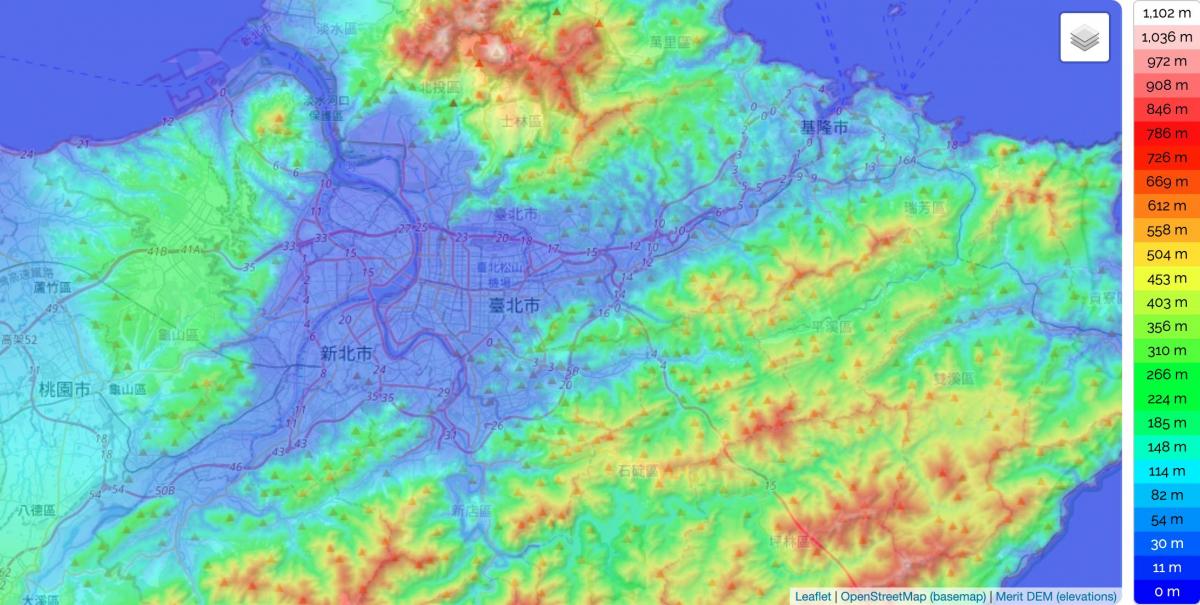 Taipei City is located in the Taipei Basin in northern Taiwan. It is bordered by the Xindian River on the south and the Tamsui River on the west. The generally low-lying terrain of the central areas on the western side of the municipality slopes upward to the south and east and especially to the north, where it reaches 1,120 metres (3,675 ft) at Cising Mountain (七星山), the highest (extinct) volcano in Taiwan in Yangmingshan National Park as its shown in Taipei elevation map. The northern districts of Shilin and Beitou extend north of the Keelung River and are bordered by Yangmingshan National Park. The Taipei city limits cover an area ranked sixteenth of twenty-five among all counties and cities in Taiwan.

Two peaks, Cising Mountain and Mt. Datun, rise to the northeast of the city. Cising Mountain is located on the Tatun Volcano Group and the tallest mountain at the rim of the Taipei Basin, with its main peak at 1,120 metres (3,670 ft). Mt. Datun main peak is 1,092 metres (3,583 ft) as you can see in Taipei elevation map. These former volcanoes make up the western section of Yangmingshan National Park, extending from Mt. Datun northward to Mt. Caigongkeng (菜公坑山). Located on a broad saddle between two mountains, the area also contains the marshy Datun Pond. To the southeast of the city lie the Songshan Hills and the Qingshui Ravine, which form a barrier of lush woods.

Coordinates : 24.87752 121.40368 25.19752 121.72368. Minimum elevation : 0 ft. Maximum elevation : 3,623 ft. Average elevation : 719 ft. The Elevation map of Taipei displays range of elevation with different colours. It is generated using elevation data from NASA 90m resolution SRTM data. The maps also provides idea of topography and contour of Taipei. Taipei hills are mostly in the southeast and are mostly formed sedimentary rock. These hills are part of Taiwan western fault mountain. The two major regions of hills are the Nangang Hills and the Heihu Hills, separated by the Keelung River.